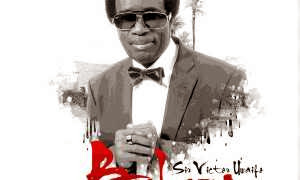 Sir Victor Uwaifo has made a name as one of the greatest Nigerian musicians till date with an impressive musical career spanning over 50 years. The Music Legend demonstrates his musical pedigree in his new track titled "BOBOZI" produced by Leriq. The timeless maestro is credited with hits such as Guitar Boy and Joromi, and this is his official debut single since signing to Hypertek Digital/960 Music Group.

The song represents the idea of A Legend Reborn. "BOBOZI" is highlife meets pop electro. Sir Victor demonstrates a unique fusion of the contemporary electronic sound with nostalgic highlife melodies. The energetic track is a sure bet on party playlists this summer. He also addresses current societal ills such as the love for money, and the infatuation with social validation. Giving credence to the saying that "Music is Timeless" Sir Victor teams up with young Arstokrat Records producer Leriq to produce the head banging jam.

The BOBOZI video does true justice to the energy that the song brings with arresting visuals. Sir Victor Uwaifo brings a truly contemporary feel to the song. With the ageless musician strumming on his guitar and dishing out his signature dance steps, music lovers young and old are in for a real treat.

Photos from the #PepsiLagosCarnival that held At TBS