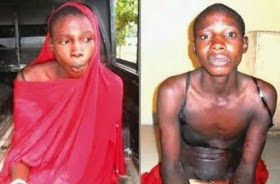 Boko Haram agents are devising new tactics everyday to beat security and perpetrate their evil act. Men of the Nigerian Army has apprehended a suspected insurgent in relation with the twin bomb blast that rocked the city of Kaduna on Wednesday. The twin-bomb attacks which led to the deaths of over 100 innocent citizens, targeted a former military Head of State, General Mohammadu Buhari and a prominent Islamic cleric, Sheik Dahiru Bauchi. A statement released on the website of the Nigerian military, defenceinfo.mil.ng, stated that a military patrol team arrested the man who was disguised as a woman immediately after the blast took place in the area. It was further revealed that the young man was arrested while trying to fizzle into a crowd of onlookers. “Troops are holding a man suspected to be connected with the explosion targeted at General Buhari on Wednesday. The young man, who was apprehended by a military patrol team that swooped on the area immediately after the explosion, had disguised as a woman clad in female garb to exude feminity with a brazier affixed to his chest. “The suspect was arrested while trying to fizzle into a crowd of onlookers when the patrol team arrived the scene… “Youths in the area attempted to mob him while he was being arrested but were restrained by troops who quickly whisked him away in an armoured personnel carrier. “He is currently being interrogated by security agencies in a bid to ascertain his links,” the statement read Meanwhile, Civil Rights Congress of Nigeria has condemned the attacks, saying it was planned to cause unrest in the country. The group described the blasts as “assassination attempts” on Sheikh Dahiru Bauchi and Gen. Buhari. In a statement issued on Thursday and signed by its President, Shehu Sani, the group said that the incidents had “once again demonstrated the annihilating danger faced by the Nigerian state.”