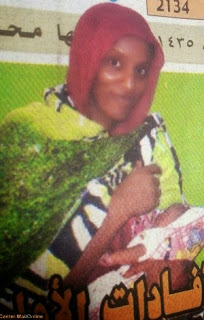 The Sudanese Government today said it will free Mariam Ibrahim, the Sudanese woman sentenced to death by hanging for denouncing her Islamic religion.

A Sudanese Under-secretary at the foreign ministry Abdullahi Alzareg said Sudan guaranteed religious freedom and was committed to protecting the woman. He said Meriam would be free from prison in a matter of days.

Meanwhile her lawyer, Elshareef Ali Mohammed has expressed reservations over the government's new position, saying they are just trying to divert international attention from the case and that he doubts she would be freed soon

"It's a statement to silence the international media. This is what the government does. We will not believe that she is being freed until she walks out of the prison. If they were to release her, the announcement would come from the appeal court and not from the ministry of foreign affairs. But at least it shows our campaign to free Meriam is rattling them. He said 'We must keep up the pressure.

Meriam gave birth to her second baby in prison on Tuesday May 27th.