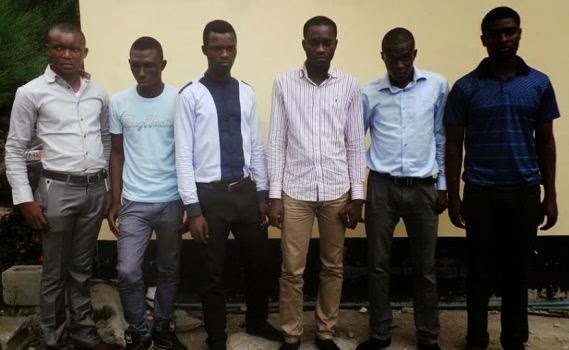 The Police Special Fraud Unit (PSFU) have arrested a 6-man internet fraud syndicate that includes a First Class honor graduate who specialize in designing the organisation’s websites and using same to defraud unsuspecting job seekers, this is according to a report on the Nigerian police website. A petition dated 22nd August 2013, received from OPEC FUND for International Development alleged that a website designed as “OFID Scholarship Website” with OFID name and logo has been used to defraud innocent Nigerian applicants. That in the website, applicants were required to pay N2,500.00 as an application fee and over 2,000 applicants responded and paid the fees through the First Bank Account Number 2020874607 and Access Bank Account Number 0056941009 with the name OFID WSAS NG. The petitioner stated further that it was one of the victims that contacted OFID via facebook, accusing OFID of being complicit in the fraud. The Cybercrime Section of the Unit swung into action and the mastermind of the fraud, one Falade Oluwapelumi Ayotunde was arrested. His arrest led to the arrest of five other syndicate members. Police investigation so far revealed that over 2,000 applicants paid the sum of N2,500.00 each into the two banks provided by the suspects and the principal suspect is the only signatory to both accounts. [1] FALADE OLUWAPELUMI AYOTUNDE – A 25years old from Akure, Ondo State and 500Level Estate Management student of Federal University of Technology, Akure (FUTA). The suspect made a confessional statement, that he designed the website of OFID WSAS (OPEC Fund for International Development for World Student Aid Scholarship) in June, 2012. That the idea came from one Fajobi Olalekan and Bolatiri Opemipo. He also admitted that he opened an account in both First Bank and Access Bank with the name OFID WSAS NG for applicants to pay in their application fee which many responded to. He further stated that he and his cohorts printed a postal for OFIDWAS which was on the website. [2] ASAOLU VICTOR – 25years old from Ilesha in Osun State and a graduate of Mining Engineering from Federal University of Technology, Akure (FUTA). A job seeker, He confessed that he assisted to paste the posters on line and he was given N80,000.00 initially and later another N40,000.00 totaling N120,000.00 for the job. [3] AWOTE TEMITOPE EMMANUEL – 27years old. A 500Level Estate Management student of Federal University of Technology, Akure (FUTA). He confessed that he assisted the principal suspect to sign guarantor for the accounts he opened in First Bank and Access Bank for the OFID program and was paid N70,000.00 which he had spent for his personal effects. He stated that he participated in pasting and publicizing the fake OFID Scholarship Program. He also stated that he knew from the onset that the OFID Scholarship Program is a scam aimed at defrauding innocent scholarship applicant but that he still went on to deceive the bank that his friend is honest and the program genuine. [4] FAJOBI OLALEKAN is 27years old from Lagos State and a Mechanical Engineering graduate of Federal University of Technology, Akure (FUTA) with a first class honour and the best graduating student in his department for the year 2012. He is currently working with Dee Xecutor Concept. He stated that while in school, he lived in the same Lodge with the 1st suspect and his mates/friends always come to him for educational assistance because of his intelligence. That he once fell victim for scholarship known as EDIADS, which made the 1st suspect to approach him and got some information regarding that one, which he believed gave him an idea on how to design OFID Scholarship Website. He further stated that he lent the 1st suspect the sum N12,000.00 for hosting the Website. He later gave him N20,000.00 in return and informed him that the fraud was successful. [5] BOLATIRI EMMANUEL ONAOPEMIPO is 25years old from Oyo State. A graduate of FUTA. He is currently a Handset Dealer. He corroborated Fajobi Olalekan’s statement that they applied for scholarship while in school which turned out to be fake and they shared their experiences with the 1st suspect which gave him an idea on how to design his own fake Website with OFID name/logo. He also stated that he lent him the sum of N8,000.00 and was later paid N12,000.00 with interest. [6] ADEBOMI OLUWATOSIN – 26years old and a graduate of FUTA. He is currently working with Delta State Polytechnic, Ozoro as a Programmer II. According to him, he offered professional advice to the 1st suspect and lent him the sum of N10,000.00 and was later given N100,000.00 as his own share. He confessed that he knew from the onset that it was fraud aimed at defrauding innocent applicants, since there was no authority from OFID. Investigation is on-going. Suspects will be charged to court soonest. The Commissioner of Police, Police Special Fraud Unit, CP Umar F. Idris advises the general public to verify the genuineness of any on-line advert before parting with their money. He also uses this medium to invite the affected victims to Police Special Fraud Unit (PSFU) No. 13, Milverton Road, Ikoyi – Lagos in furtherance of the investigation. DSP NGOZI ISINTUME-AGU Police Public Relations Officer For: Commissioner of Police Police Special Fraud Unit Ikoyi – Lagos