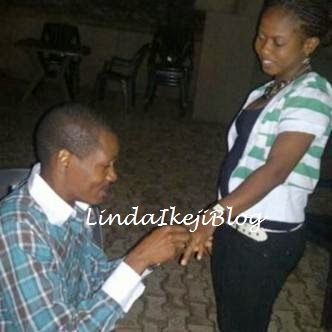 Engr. Uzochukwu Eze, (pictured above with his fiancee) whose wedding was supposed to be yesterday Saturday September 6th, was shot dead on Friday September 5th by unknown gun men

Eze was killed at a filling station close to Dhamija Bridge at the Trans-Ekulu area of Enugu State while trying to buy fuel. 4 other people including the manager of the filling station, a pump attendant and another customer buying fuel are said to have lost their lives as the gun men opened fire indiscriminately.

Sources say the groom-to-be was trailed to the filling station and before he could get down from his car, the gunmen, suspected to be cultist, opened fire, killing him instantly.

Enugu Police said they have commenced investigation into the killing