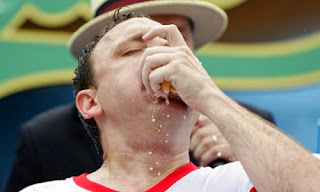 A Fourth of July hot-dog eating contest in western South Dakota turned tragic when a contestant choked to death. Walter Eagle Tail, 47, of Custer, died at a hospital Thursday after attempts to save him at the scene failed, Custer County sheriff Rick Wheeler told the Rapid City Journal. “There was someone doing CPR when we arrived,” Wheeler said. “He probably just suffocated. It got lodged in his throat and they (paramedics) couldn’t get it out. “It all happened within minutes,” the sheriff said. The Custer chamber of commerce, which sponsored the contest, canceled a pie-eating contest scheduled for fridayWe are at a loss for words,” chamber executive director Dave Ressler said. “We are mourning for Walter and his family right now.” Speed-eating competitions are popular over the Fourth of July weekend. Eight-time champion Joey “Jaws” Chestnut managed to eat 61 hot dogs in 10 minutes at an annual contest in Coney Island, New York, on Friday eight short of the record 69 he swallowed in the 2013 competition. George Shea, the chairman of Major League Eating, a competitive eating organization based in New York, said organizers do all they can to prevent casualties during contests. “We always make sure it’s in a controlled environment,” Shea said. “We organize the entire thing around safety. (Just as) if it’s football or hockey or auto racing, we approach it as a top priority.” Funeral arrangements were pending for Eagle Tail, whom friends described as a fun-loving, kind and caring man. “Walter was just being Walter, having fun when he entered this contest,” said Ardis McRae. “He was just having a good time.”