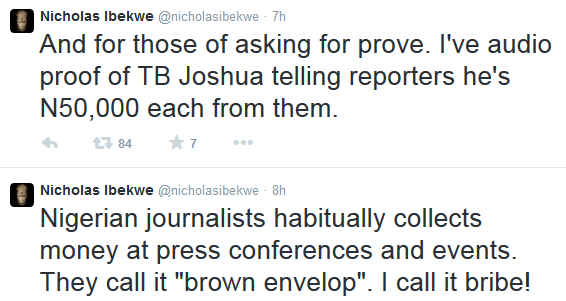 The Journalist Nicholas Ibekwe on the 20th of september shared an audio proof of T.B Joshua offering journalists covering the building collapse N50,000 to ‘fuel’ their cars after he met with them behind close doors at his church premises. After giving them the money, he asked them what they planned to write and some of them said whatever he wants them to write. He asked them to talk about the people who were rescued/survived and not focus on the people who died. But unlike the other reporters, Ibekwe refused the ‘brown envelope’ offered and has taken to Twitter to air his displeasure and disappointment over how the entire tragedy is being handled by SCOAN, the government and the press at large.
listen to audio
HERE