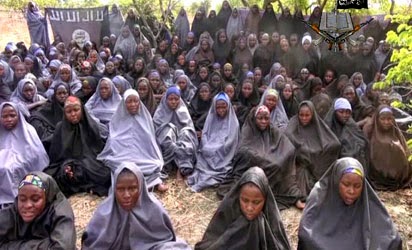 President Goodluck Jonathan has reportedly seen a new video released by Boko Haram, where the abducted school girls of Government Girls Secondary School, Chibok, Borno State, spoke about their ordeal in the hands of the insurgents for the first time and pleaded with him to secure their release. The girls were reportedly ill and are in camps located in Chad, Niger and Cameroon, with one of them nursing a broken wrist. The footage, not released publicly but seen by the London-based The Mail on Sunday was taken in a jungle clearing a month after their abduction. The video, according to The Mail of London, indicated that the girls looked healthy, as eight of them, dressed in their home-made school uniforms of pale blue gingham, pleaded for release while standing courageously in front of the camera. They were reportedly clearly scared, upset and trying to be brave, with each walking in turn to a spot in front of a white sheet fixed to a crude frame between the trees. According to The Mail, four of the girls can be heard clearly in Hausa language stating that they were taken by force and that they were hungry. The video indicated that a tall girl, aged about 18, said tearfully that “My family will be so worried”, even as another spoke softly, saying ‘I never expected to suffer like this in my life.” Similarly, a third girl was captured in the video as saying ‘they have taken us away by force’, while the fourth complained of not getting enough food. More than 250 girls were taken in a raid on their school in Chibok on April 14 by Boko Haram terrorists. However, Cameroon’s military reportedly killed about 40 Boko Haram militants in the country’s northwest last weekend, a government radio reported yesterday, a day after Nigeria labelled the Central African nation the weakest link in its fight against the extremist sect. The clashes leading to the killing occurred in the town of Kouserri, which borders Nigeria and Chad. Cameroon, a clog in the wheel The Federal Government regards Cameroun as not cooperative as Niger and Chad in the fight against Boko Haram. After a security summit in Paris two weeks ago, Cameroon said it deployed 1,000 troops to its border to help contain the increasingly deadly group. A series of suspected Boko Haram attacks in four villages in Nigeria’s restive North-East killed several people, residents said Sunday, in the latest violence blamed on the Islamist insurgents. The military was not immediately available to comment on the raids in Borno State, the hardest hit area during Boko Haram’s five-year extremist uprising, which has killed thousands
read more here