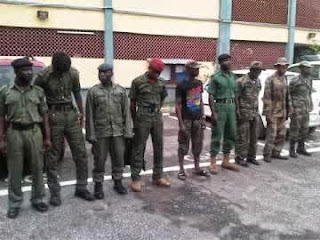 According to the police, the suspects – John Henry, Israel Amuzu, Joseph Jidai, Peter Azubuike, Obi Chinyere, Oha Paul, Sulaiman Rahman, Hammed Gbadamosi and Oguntamu Abiola – were arrested in the Amuwo-Odofin Local Government Area and other places while providing security for churches and vehicles.

They were paraded in the command headquarters in Ikeja on Tuesday.
One of them, Henry, said he made N3,000 on a daily basis from posing as a military man.

The 30-year-old indigene of Kaduna State, who is married with three children, explained that joblessness and the need to cater for his family forced him into parading himself as a soldier.

He said, "I got the military uniform from a friend who is a soldier. He left it for me when he was redeployed to another state. I was using the uniform to escort commercial drivers plying Mile 2 to the Oshodi area. These drivers give me about N3,000 on a daily basis.

"I actually want to join the military. That is why I wear the uniform, and I am ready to work in any part of the country."
Another suspect, Jidai, an indigene of Maiduguri, Borno State, said he obtained the uniform from a soldier friend who was dismissed from the service recently.
"He sold it to me for N9,000 before he travelled. I am actually a member of the Man O'War. I wore the uniform to escort commercial drivers and I was given about N2,000 daily," Jidai said.
However, the state Commissioner of Police, Mr. Umar Manko, warned that the police would not allow anyone to use military uniforms to perpetrate crimes.

He said, "All of them claimed to be members of the Man O' War, but I do not know what Man O' War members are doing in military uniforms. We arrested some of them who claimed to be working for the Amuwo-Odofin Local Government Area. While some fake soldiers were providing security for churches, others were escorting vehicles around Lagos.
"The fact is that none of them has ever served in the military. Many of them said they bought these uniforms in the market, but we would not allow anyone to use any uniform to perpetrate crimes here. Most of the crimes that were reported around the FESTAC area were perpetrated by these men who put on military uniforms. That is why we decided to put a stop to that."

On the trigger-happy police officer who was alleged to have killed a young engineer in FESTAC Estate, Manko said the police have concluded investigations and he would soon be charged to court.
He said, "We are almost concluding investigations, and we will soon charge him to court. Nobody has the right to extra-judicially take the lives of people. If anybody does that, he must face the law."